Last Tuesday, Yoga Black Lagoon hosted the first Yoga Enthusiasts Social… and it was a rollicking, smash-tastic time. Thanks so much to all the yogis who came out that night (both in person and/or in spirit)! 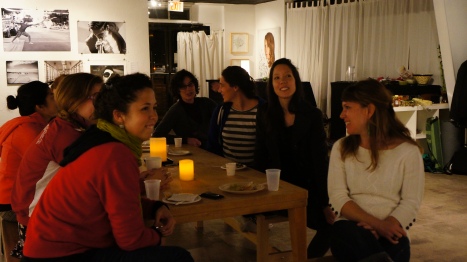 The theme for our first Social Event was “Yoga Off the Mat – Together.” And yes, the idea of “yoga off the mat” is a bit cliche – yoga teachers talk about it in classes a lot; heck, even Sean Corne’s social activism group has that phrase as it’s name! But sometimes talking about something over and over again can shed new light on the matter – maybe since somebody completely new and different to you says the same thing, it hits your ears in a different way. Or maybe a new friend has never heard the topic before, and as you explain it to him/her, you hear yourself in a new light – new connections happen in your brain, and something that didn’t mean anything to you before now does! This is one phenomenon we got to talk about during our time together that night. =)

But in general, the theme was to give us a chance to explore each other, and to figure out the direction that we want to go as a group. Al final, the overarching sentiment seemed to be that it was so good (the way a yawn and a stretch feels so good after coming out of savasana) to have the chance to talk about yoga with each other! We all have our own individual, unique yoga practices, and all of us have a different thing we’re searching for – but we’re following a similar set of ideas, and it’s nice to get a chance to talk about our personal discoveries with others.

But a few more details about what our event entailed!

We ate awesome food, got to know each other, and had two brief talks by local yoga teachers Ashley Cheng and, well, me.

I discussed the yoga book I’m currently reading: The Wisdom of Yoga, by Stephen Cope.

The book is a time-weaving, story-telling investigation of Patanjali’s Yoga Sutra, incorporating true stories of contemporary yoga-practitioners, findings of neuroscience and psychology/-therapy, discoveries by ancient yogis, and investigations of the foundational texts of the yoga tradition. Given the topic of the first event (yoga community), I also highlighted some of the benefits that Cope directly and indirectly discusses. His book includes the stories of six contemporary yogis and their relationships with each other – giving plenty of opportunity to see how practicing yoga together and spending time together can influence all of us on our yoga path. Indeed, our YES group discussed the differences and pros/cons of community rituals and also the interesting paradox of the introversion that comes with yoga combined with the need to be with others.

Ashley led us in a practice of one-on-one connection and gave us the opportunity to discuss hands-on assists in yoga classes.

First, we got to practice an exercise from Forrest Yoga (Ashley’s current love) called “Truth Speaking.” We got into pairs and, for two minutes each, talked one to another – talked from a place of deep truth (well, from “deep truth” after a few paragraphs of flustered, introductory rambling!), while the other person listened completely quietly and with compassion. It was certainly interesting! Personally, I found the exercise to be insightful into both how I view myself, and how I view other people as viewing/judging me while I talk. And yeah – at the end, I felt that it was a relief to not only speak truth, but to also hear truth from another. To hear truth, and not just the mundane chit-chat that we so often have during the day (which does, indeed, have its place, but does not need to dominate all of our conversations).

Second, we discussed the pros and cons of teachers giving hands-on assists to their students in the classroom. Hands-on assists include helping a student move into a different embodiment of a posture, or massage during savasana. To me, the best part was to hear from two different perspectives on the same thing – from the students’ side, and from the teachers’ side. Touch can be so healing, and so often the people of this individualistic society are deprived of it. Furthermore, touch can be extremely informative to everyone involved. It can teach the student more about their own body and the way it moves; it can teach everyone about the physical experience of feeling and of being in our bodies. But the opposite side of that coin is that touch can also lead to a negative, even injurious, experience. Hence, it is beneficial to everyone involved to continually inform themselves about the power of touch.

We finally had to draw the “formal” session to a close at 9 – the moms needed to get back home! – but we kept hanging out and talking for quite some time afterward. Next YES will be in March, and I very much hope that you’ll consider joining us! Stay tuned for the invitation and for more information as it is planned. Until then, you can catch Ashley and me teaching at Yoga Black Lagoon throughout the week – as well as teachers Cyndy and Rebecca, and our students who share their practice with us both in class and at YES. 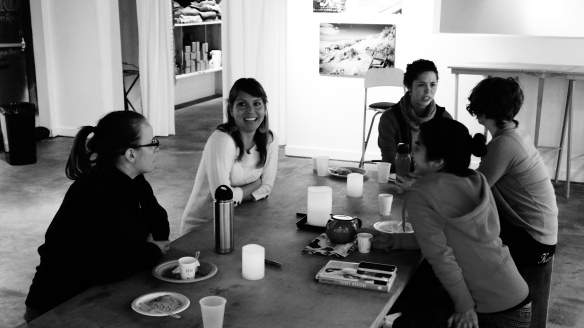